skip to main | skip to sidebar

Monday night was the filled with anticipation, as Marshall returned to the team after he held out during contract negotiations. The game was the team’s 9th game in nine weeks an exhausting schedule of beer-league hockey. The game was scheduled for the Olympic sized ice and the All Stars entered the game with much hope and anticipation.

Marshall’s return was a great moment and it was hoped that he could help turn the team and return us to a win. You can see from the picture below Marshall is happy to be back. 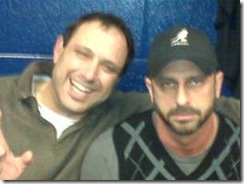 The game started well enough as Ian was called on early and often to hold back the onslaught of The Stealth, the first place team in the division. Unfortunately after a few breakdowns in the defensive zone, the ice was broken and the opponents were on their way to a lop-sided 6-1 victory. In the midst of the score some things stood out. The first was a fine effort from Chris Clarke. He scored a goal, but it was his hustle at both ends of the ice was very effective. Marshall’s return brought back some stability to the D, but slowed by a “pulled” groin Marshall struggled but never let the pain show. Mike Brown did his job by stopping a hard shot from the point, unfortunately it had been  a shot by Jim Boutin. I think it left a mark. Alan showed us that you can complain about every player on your own team while forgetting about fore-checking and back-checking and thinking that no goals and no assists is a solid outing.

On a night when there was not that much to celebrate other than it is so great to be able to hang out with friends; This week I award Chris Clarke (no photo available) as this week’s winner of the Remax Player of the Week.

The current record at the quarter post of the season 3-7-0. And still holding on to a playoff spot.

Posted by Ian Abramson at 7:26 AM No comments:

Starting the Season with Win #1

The hockey season finally started last night and for the ReMax All Stars, it started the way we would have wanted; with our first win.

It was a great line-up The team took a solid 4-1 victory over the Rebels. The game was close for most of the first 2 periods. The All Stars took the lead with the first goal of the season from Marc Allaire, so a quick scramble in front of the Rebels. Next was the ultimate game winner by Alan Benlolo; who was the latest addition to the team, taking the spot of the recently departed Zam. His goal was a a quick shot that hit its mark. The All Stars closed with 2 more quick goals in the 3rd period, including a bang-bang play from Al Murphy to Chris Clarke, where Chris was able to redirect the pass into the net for the 4th and final goal.

The team also looked great defensively; with solid play from the net to the blue line. Ian had a solid game in nets and his only blemish on the almost perfect night was a mad scramble around the net after he was unable to clear it. Ian stopped everything else including a spectacular toe save on a breakaway that would have tied the game at that time, but the Rebels were to be denied and the All Stars started the season on the right foot.

The REMAX Player of the Game: Ian Abramson

Some blurry pictures from after the game:

Ian After His Solid Performance: 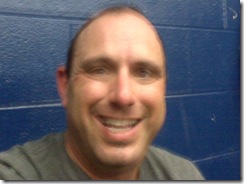 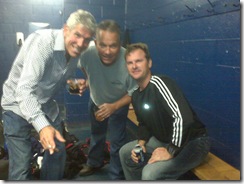 So the All Stars look to a promising season after a great victory from everybody who was there.

And let the games begin….

Posted by Ian Abramson at 11:57 AM No comments: 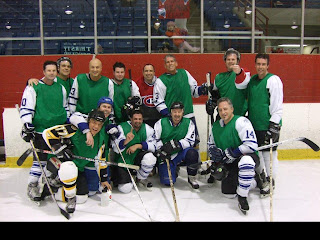 Tomorrow night at 9:30 the season begins. The Reamx All Stars most of whom will be back to play again.

As the season moves along I will be updating the blog and keeping things as up to date as possible.

Who knows what this season will bring. Let's look back at some of last year's highlights:

It was quite a year and bring on the competiton...I predict that this team will make the playoffs!!!
Posted by Ian Abramson at 5:32 PM No comments:

Ian Abramson
Ian Abramson is based in Toronto, Canada and is the Lead Data Architect for Walmart Canada. Ian’s focus is to help enable data driven decisions through Master Data Management, Business Intelligence and Data Science . Ian has written numerous books on both Oracle and data warehousing and is a frequent presenter at Oracle and industry conferences and seminars. He is the co-author of the Oracle Database 12c Beginner’s Guide (McGraw-Hill Osborne Media, 2014). Ian is an Oracle ACE specialized in Big Data, BI and Data Warehousing.